Finding focus and inspiration early in an art career is challenging. In fact the two needs can lead you into opposite directions. It’s easy to follow whims and do what takes your fancy but the truth is you also need discipline.I find mind through poetry inspiring art.

Which resulted in a confused array of paintings. One week I’d be doing caricatures, the next landscapes. Sometimes abstracts, you get the picture. Eventually I fixed on a medium, watercolour and acrylic ink, but the subject matter still varied.

Clarity came when I was “Inspired by a Poem”

The title of my local Art group’s exhibition.

The first one was based on William Blake’s Jerusalem,

The poem is also a popular hymn.- I’d been playing with buildings and it was one of my first to combine the technique i developed and architecture. It’s loosely based on Times mill, a mill which dominated my childhood walks to school. But with a healthy dose of artistic licence. I’ve played with the mill and the lane by it.

It’s called “And did those feet in ancient Times…?”

The second piece is a lyric about Lowry.

I was desperate to do my second painting , but struggled to find a good poem. As a child, I  would cycle to my Aunt’s with a friend and my brother. The route included pushing our bikes up these steps. They’re known as the 24 steps. I’d found out that the LS Lowry painting called “The Chapel” was of the same steps. 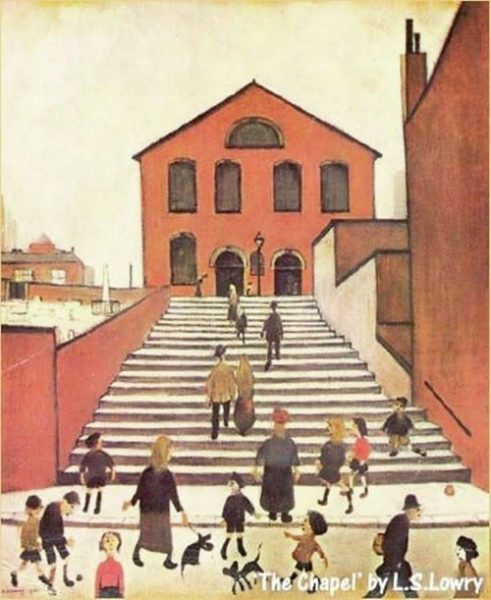 So, I had to do my own version. But I could only “poem” I could find was Matchstalk Men Song lyrics are poems though, aren’t they.

So here’s “In the footsteps of Lowry”

But on the other side…

About the green eyed cat stalking it’s prey at night. I’m hoping I’ve avoided the twee, but I’m not convinced. I used my cat and a photo of our last one for the models.

By the time I’d finished these three, I’d found a direction.

The Mouse Police  was well received but I’ve never felt it was the right direction to go. I”d had more ideas around the architecture which won out.

Or rather took over.

I’ve recently added these older pieces to my shop page, you might want to check it out.