With seven iron-ribbed elliptical spans across the Thames by the Houses of Parliament, the arch bridge is clear and solid.  It opened in 1862, making it the oldest surviving road bridge across the Thames in central London.  Its size is deceptive because in the painting, scale is relative. What may appear massive in one situation is smaller in another – but more on that later.

On various grounds, the Westminster Bridge has permission to be bold. An ancient structure rebuilt to reflect its significance as a thoroughfare. At one time the bridge was nicknamed the ‘Bridge of Fools’ because at the time funding was not raised in the typical way (private enterprise and tolls); instead, money was raised via a then-fashionable ‘lottery’.  Even its colour – green – is significant.  In 1970 it was painted to match the seats in the House of Commons standing near the bridge.

The sky is a stark, pale hue emphasizing the large contrasting structures that stand ghostlike in the scene. The Southbank Place apartment block and London Eye, upon close examination, reveal details, but so subtly, that in places the effect is transparent; almost invisible.

In the Thames River there is the merest suggestion of water around a cruise boat. A quick wide stripe of red interrupted by the words ‘River Cruise’ picked out in white. A few trim lines and windows are all that give substance to this boat. Even the prow peters out into the waves as they reflect the sun.

Cathy mentioned scale earlier. Look closely, and notice a crowd atop the boat. A mass of people huddled together, watching the world pass by from their vantage point.  Some point, while chatting.  Others just enjoy the view.  A few squiggles and changes of colour suggest the last individual’s features.

Glancing along Westminster Bridge there are more people

Tiny lined up specks of colour. Even the vehicles are small and diminished in significance.  A red London bus disappears to the left, followed by a white lorry with blue panels and the car roofs are last against the County Hall walls. Even ornate streetlights disappear in the daylight visible atop the bridge signals.

Finally, notice the ink tendrils. Cathy usually considers these as life force reflections emanating from buildings in use. Here they seem to take on a different role.  Bold statements marking rising from County Hall, and the London Eye may be a defined progress into uncharted spaces? All the colours seem to escape, reaching out for some elusive future suggestion. What could it be? 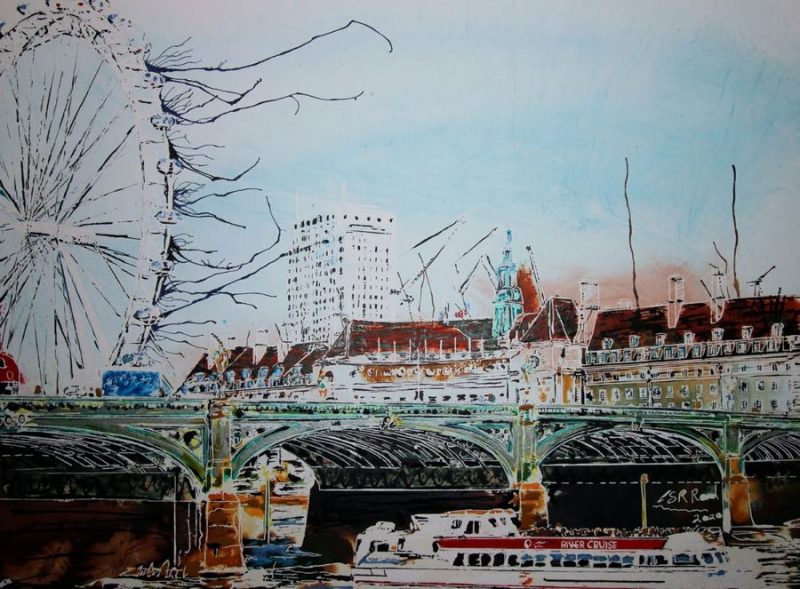