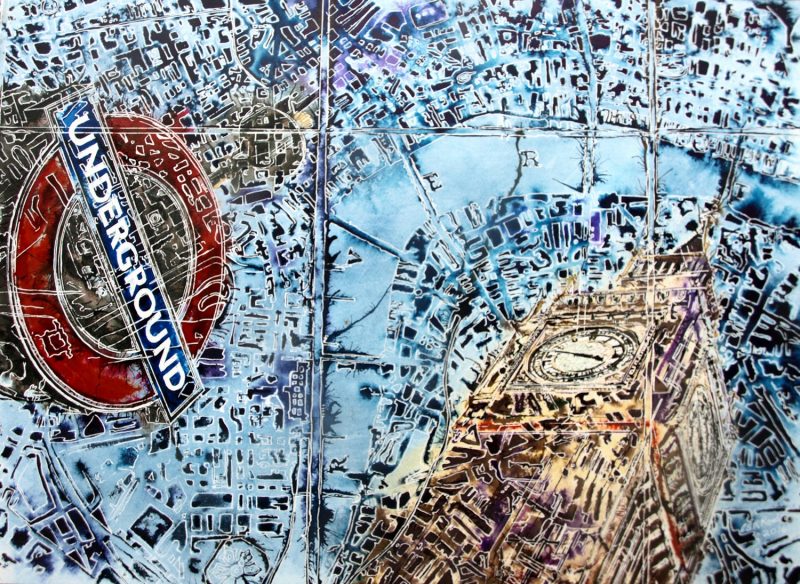 Maps are at the heart of all journeys, we need to know where we going. Even in these days of Satnav, you can’t beat a good old fashioned map. The painting London maps is based on a one I found in the Victoria and Albert Museum, superimposed onto a photograph taken outside the Tube Station at Westminster with Big Ben towering overhead. The street names have been edited out to reveal the pattern of streets and buildings with the River Thames flowing through the middle.

The Underground sign calls to you as it dominates the left-hand side. Then the clock tower of Big Ben itself emerges. The colours bleeding into the blue of the background. Streets and buildings form a patchwork which help define the tower but also serve to obscure it’s shape. The upright stone columns morph into blocks of houses in the map. Street become one with architecture as they melt into a mass of confusion. Parts are distinct then lost as the lines are followed and become something else. If you know London you might pick out the Houses of Parliament floor plan in the centre.  The prominent architectural features abound but you could easily become lost, such is the ambiguity of the map.

London Maps was part of my solo exhibition in 2018. Check out the video walkthrough.

Looking for inspiration for your home?
Original Art is the ultimate Exclusive

Why not browse my shop for inspiration like Cheesegrater Couple here